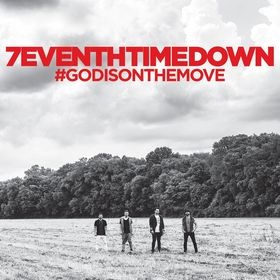 BEC Recordings' 7eventh Time Down is set to release their third studio album, God Is On The Move, next month on August 21. The album features the band’s current radio single “Promises,” which moved up three spots this week at AC Monitored charting in the Top 30. The single is also charting in the Top 20 at AC Indicator, Top 25 at Hot AC/CHR and Top 30 on the National Christian Audience chart with more than 1.6 million audience impressions.

"All across the world we are seeing that God is still good,” shares the band about the inspiration for the upcoming album and single. “He still keeps His promises, God is faithful, He is redeeming all of us through Jesus. We believe revival is just around the corner! We believe God is in fact on the move.”

God Is On The Move is a labor of love for the band as they either wrote or co-write the entire album. Additional co-writers include Jason Ingram, Ian Eskelin, Tony Wood, Brian White, Pete Stewart and Ryan Stevenson.

7eventh Time Down has continued to reach fans since their label debut in 2011. The band tours continuously across the nation bringing fans high-energy, impactful live shows with their hit radio singles. In 2013, 7eventh Time Down released their sophomore album Just Say Jesus, which produced their hit radio single from the title track that spent an incredible 52 weeks on the National Christian Audience chart.

This fall 7eventh Time Down will be headlining "The Promises Tour." They will be on the road with Manic Drive and Neverclaim on this tour. Dates and cities will be announced soon. The band will also be performing at this year’s Disney’s Night of Joy on Saturday, September 12. For the remaining tour dates for 7eventh Time Down, click here.

ABOUT 7EVENTH TIME DOWN: The Kentucky-based foursome has already garnered an enthusiastic army after their 2011 debut, Alive in You, on BEC Recordings. 7eventh Time Down is composed of Mikey Howard (vocals), Ciff Williams (bass), Eric Van Zant (guitar) and Austin Miller (drums). The band has toured with a long list of impressive artists, including Newsboys, for King & Country, Family Force 5 and Matthew West, among others. The band released their sophomore album Just Say Jesus in 2013 with the title track becoming a huge radio hit.