3 Bible Stories That Will Give You Hope Today 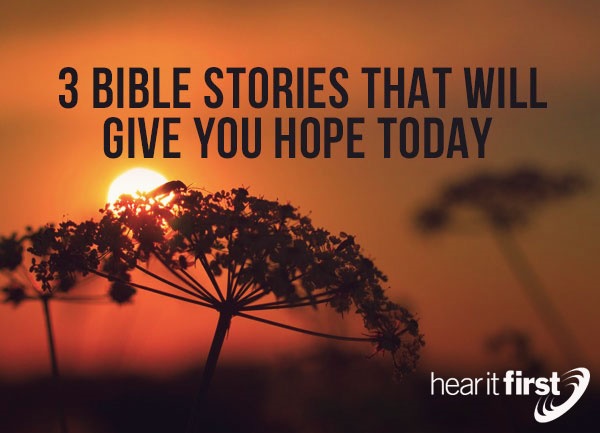 Here are three Bible stories that I hope will give you hope if you are in need of it today.

The Woman Caught in Adultery - John 8

What I find amazing in the account where the woman caught in adultery was brought before Jesus was “Where was the man at?”  Why didn’t they bring him too because he was just as guilty as the woman was and maybe more so?  Perhaps it was even his idea, to begin with.  It begins when “Early in the morning he came again to the temple. All the people came to him, and he sat down and taught them. The scribes and the Pharisees brought a woman who had been caught in adultery, and placing her in the midst they said to him, “Teacher, this woman has been caught in the act of adultery” (John 8:2-4).  They told Jesus “in the Law Moses commanded us to stone such women. So what do you say?” but they only did this “to test him, that they might have some charge to bring against him” (John 8:5-6a).  They were trying to trap Jesus but they can’t trap Jesus because He knew their hearts.  For one thing, they brought the woman into the temple to shame her in public and appear to be the self-righteous posse they were.  It was more like a lynch mob though because they wanted her dead.  They thought they had placed Jesus between a rock and a hard place.  On one hand, if Jesus said no to stoning, they’d accuse Him of breaking the Law of Moses.  On the other hand, if Jesus condoned the stoning of the woman, then they could go to the Roman authorities and tell them that Jesus is breaking Roman law where only the Roman authorities could condemn and kill someone.

Jesus seems to ignore these self-righteous, self-appointed judges by writing something in the dirt (John 8:6b). He wrote has been long debated.  Was it the sins that those who brought the woman had committed?  Was it the names of those who had also committed these sins?  The Jews kept badgering Jesus until He finally stood straight up and looked them square in the eye and said: “Let him who is without sin among you be the first to throw a stone at her” (John 8:7b) and “when they heard it, they went away one by one, beginning with the older ones, and Jesus was left alone with the woman standing before him” (John 8:9).  Perhaps the older ones had more sin to be ashamed of than the younger ones and so they left first.  After they were gone, Jesus said “Woman, where are they? Has no one condemned you?”  She said, “No one, Lord.” And Jesus said, “Neither do I condemn you; go, and from now on sin no more” (John 8:10-11).  The hope is that even if you’re caught in a serious sin and at a time of public shame and humiliation, there is room for forgiveness, even for the worst of sins.  The key is Jesus tells her “from now on sin no more.”   That is a picture of repentance.  Jesus was the only one Who was without sin and He was the only one Who had the right to stone her but He didn’t.  Instead, He said, “Neither do I condemn you.”  What a beautiful picture of God’s mercy and forgiveness.  Don’t ever lose hope if you’re ever caught in a serious sin, even if it’s in the public eye, because no sin is ever greater than our Savior.

God loves an underdog and I love stories where the unlikeliest hero or heroine wins in the end.   It’s like when an unranked college team upsets a ranked team and they storm the court after the upset.  Gideon is a perfect example of the underdog but God often chooses those who the world has little expectations of so that God can receive the glory that He rightfully deserves anyway.  When the angel of the Lord came to Gideon and said, the “Lord is with you, O mighty man of valor” (Judges 6:12).  This came during a time when Israel had fallen into disobedience (Judges 1:1) and God had allowed the Midianites to oppress them.  Every time the harvest was ripe, the Midianites would swoop down out of the mountains and raid the country and strip away all of the harvest and livestock and so “Israel was brought very low because of Midian. And the people of Israel cried out for help to the Lord” (Judges 6:6) so “the Lord turned to him and said, “Go in this might of yours and save Israel from the hand of Midian; do not I send you?”  And he said to him, “Please, Lord, how can I save Israel? Behold, my clan is the weakest in Manasseh, and I am the least in my father's house” (Judges 6:14-15).

Here is why this story is so hopeful.  Gideon is the least of his clan, he is the runt of the litter (so to speak), he is in hiding when the angel of the Lord approaches him and yet he is called “O mighty man of valor” and to “Go in this might of yours.”  You have to wonder if Gideon looked over his should and thought, “You mean me?”  The point is God sees what is before it even exists.  He knows the future and speaks as if it’s already present because, with God, it really is!  God knew that Gideon’s tiny little force of 300 farmers and shepherds could never destroy a camp of 135,000 seasoned, experienced, and well-trained Midianites soldiers but with God, all things are possible (Matt 19:26) so don’t ever lose hope, even if the odds look exceedingly hopeless.  They would later say of Gideon, “God has given into his hand Midian and all the camp” (Judges 7:14c) so it was God’s victory, not Gideon’s, whereby God receives the glory.

The Christian faith is not a hope-so hope but a know-so hope.  It’s not like the hope of the world which disappoints but rather it’s a hope anchored in God and in the Word of God and in the God Who can do all things.  It is my hope that I could give you some hope from these three historical accounts in the Bible.  I urge you to find and read your own hope stories in the Word because in each one of them, it was the Lord’s doing and for the Lord’s glory.  God takes the least of the world and does the most through them so that He is most glorified because nothing else matters.