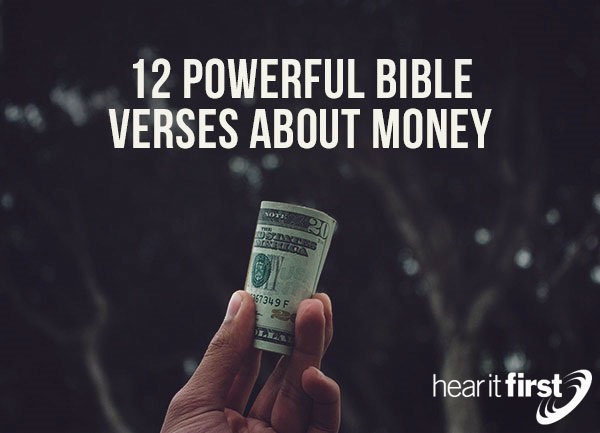 What does the Bible say about money? The love of money is said to be the root of all evil but what about money itself? Learn more about money in the Bible from these scripture quotes.

Matthew 6:24 “No one can serve two masters, for either he will hate the one and love the other, or he will be devoted to the one and despise the other. You cannot serve God and money.”

Most Bible translations describe us as servants of God, but in reality, the Greek word used for servant in the New Testament is “doulos” which means, slave and not a servant.  There’s a huge difference between a slave and a servant.  A servant gets paid and can go home.  The servant owns nothing and stays with the family…but then, over time, they become part of the family.  Only when Jesus speaks of Himself as being a servant it is the actually word, “servant” used, but for the Christ-follower, we are much more than servants; we are His slaves, and as slaves, all that we own is His, so obviously we can’t serve money and serve God.  We are property of the Master, having been purchased by the very blood of Jesus Christ (1st Cor 6:20).

Hebrews 13:5 “Keep your life free from love of money, and be content with what you have, for he has said, “I will never leave you nor forsake you.”

I see that the author of Hebrews links a love of money with discontentment as he says that we’re to keep our lives free from the love of money and just “be content with what you have,” meaning that if we keep our lives away from the evil of loving money, we’ll be more content.  Besides, God has promised He will never leave us or forsake us, so even if our money forsakes us, God never will.

First Timothy 6:10 “For the love of money is a root of all kinds of evils. It is through this craving that some have wandered away from the faith and pierced themselves with many pangs.”

They say that money talks.  Mine mostly says, “Bye, bye.”  But a love of money says a lot about a person and can lead to “all kinds of evils.”  This isn’t saying that money is the root of all evil, as some translations say, but loving money can lead to evils types of evil, like thievery, embezzlement, money laundering, and phishing schemes, so it’s best not to love money because once a person owns a lot of money, their money actually owns them.  They become a slave of their money. That’s why “some have wandered away from the faith.”

You can’t take it with you, but you can forward it ahead, so if we lay up treasures here on earth, what good is it? It’s all going to be burned up anyway as the Apostle Peter writes, “the day of the Lord will come like a thief, and then the heavens will pass away with a roar, and the heavenly bodies will be burned up and dissolved, and the earth and the works that are done on it will be exposed” (2nd Pet 3:10).  If you sow your treasures into the things of God, you are storing up treasures in heaven.  Just take a look at your checkbook ledger or bank statement; it really reveals where your heart is at.

First Timothy 6:17-19 “As for the rich in this present age, charge them not to be haughty, nor to set their hopes on the uncertainty of riches, but on God, who richly provides us with everything to enjoy. They are to do good, to be rich in good works, to be generous and ready to share, thus storing up treasure for themselves as a good foundation for the future, so that they may take hold of that which is truly life.”

The Apostle Paul is warning those who are rich and since this is written to Timothy and the church, apparently there were some in the church who had wealth, so they had to be taught to not “be haughty” and set their hopes on their money and not in God.  It’s so easy to depend on money more than God because money can buy us what we want and it can satisfy our every need in life, however that is fleeting.   Besides, God wants us to lay up a good foundation for the future in His kingdom, because that’s “truly life.”

Proverbs 13:11 “Wealth gained hastily will dwindle, but whoever gathers little by little will increase it.”

This is a warning against get-rich schemes. If it sounds too good to be true, then it probably isn’t true.  Someone, somewhere is going to get hurt in any quick-money making scheme.  The best way to earn wealth is the old fashioned way; to work for it. That’s really earning it and not gaining it by some less-than-honorable means. It’s the one who “gathers little by little” who will eventually “increase it.”

Deuteronomy 8:18 “You shall remember the LORD your God, for it is he who gives you power to get wealth, that he may confirm his covenant that he swore to your fathers, as it is this day.”

The reason God reminded the nation of Israel that it is He that gives wealth, was so that they (and we) might not “say in your heart, 'My power and the strength of my hand made me this wealth’” (Duet 8:17).  Of course, if we take credit for blessings, that robs God of glory.  Paul humbles us by asking, “What do you have that you did not receive? If then you received it, why do you boast as if you did not receive it” (1st Cor 4:7)?  I ask myself, “What do I have that I did not receive?”  I came up with zero!

First Samuel 2:7 “The LORD makes poor and makes rich; he brings low and he exalts.”

Very similar to Deuteronomy 8:18 is this verse that ascribed to the Lord the ability to make rich but also to make poor.  Let none of us boast because He can bring low anyone to humble them or exalt anyone that’s humble.  That is His prerogative.  If you humble yourself voluntarily, then God won’t have to do it for you.

The New Testament has almost 365 references about not worrying, not being anxious, or not fearing.  That gives us about one verse for every day of the year, and we probably need it because of our tendency is to be anxious over just about everything.  I speak from experience.  I still think like the “Gentiles” think who worry “after all these things.”  Sadly, I forget that my heavenly Father knows what I need before I even know it.   I pray that I remember to seek the kingdom first, and that means seeking the King of that kingdom.

Proverbs 22:7 “The rich rules over the poor, and the borrower is the slave of the lender.”

Whoever is in debt understands this verse very well.  You don’t need to be a Bible scholar to know that the rich rule over the poor.  Most of us have at least some debt and we know what it feels like to be “the slave of the lender,” at least until we pay off the debt.

First John 3:17 “But if anyone has the world's goods and sees his brother in need, yet closes his heart against him, how does God's love abide in him?”

It’s like a man who came in the middle of the night knocking on his neighbor’s door and asking for some help because he couldn’t get his car started and needed a jump start.  The man didn’t answer the door, having looked out the window and seeing his neighbor’s car hood open.  For him to turn someone away was sin, even if it was only using his time to help his neighbor, because “whoever knows the right thing to do and fails to do it, for him it is sin” (James 4:17).

Luke 16:11 “If then you have not been faithful in the unrighteous wealth, who will entrust to you the true riches?”

God will reward those in the kingdom who have been faithful with very little, but if we’re not faithful even in the little things, God’s not going to put us in a place where we’ll have a lot of responsibility.  That’s because we haven’t proven faithful in the smallest of things.  Those “little things” might be giving someone some financial help, offering to give someone a ride to work, helping clean the church bathrooms, or just whatever else comes to mind.

Conclusion of Money in the Bible

A person can own a lot of possessions, but then the danger is, the possessions come to own them. Like the young rich ruler who went away sad because he had much wealth, and he worshiped it, and not really worshiped God like he boasted.  I believe you cannot out-give God.  Solomon’s reminder is so important, that “Whoever is generous to the poor lends to the LORD, and he will repay him for his deed” (Prov 19:17).

A Prayer for a New Season - Your Daily Prayer - September 27

May you praise Him and trust Him in every season of your life.