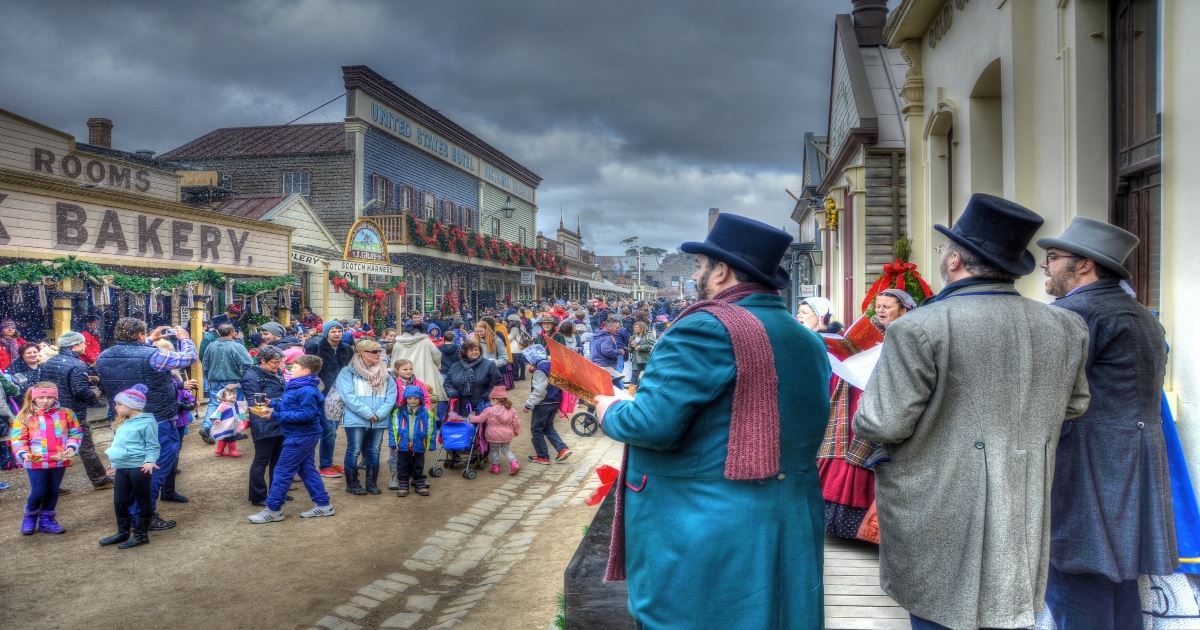 Christmas carols are a joyful part of the Christmas season every year as we sing these songs at church, with family, and maybe caroling in your neighborhood. Music is a powerful way to praise and rejoice in God's glorious gift of Jesus to save mankind from sin and death. Let us rejoice and celebrate the Christmas story of Jesus' birth with carols old and new! Learn more about the popularity of Christmas carols below with traditional and modern songs.

The Rise in Popularity of Christmas Carols

The distribution of Christmas music books in the 19th century helped to increase the popular interest of carols. William Sandys' 1833 compilation Christmas Carols, Ancient and Modern featured the first publication in print of "God Rest Ye Merry, Gentlemen", "The First Noel", and "Hark! The Herald Angels Sing." The publication in 1871 of Christmas Carols, New and Old by Henry Ramsden Bramley and Sir John Stainer was also a notable contribution to a revival of carols in Victorian Britain.

The singing of carols was additionally popularised in the 20th century when Oxford University Press published one of the most beloved carol books, Carols for Choirs. The books in the Carols For Choirs compilation came to be viewed as standard choral texts throughout the English-speaking world and were profoundly influential; according to the composer John Rutter, they "changed the whole sound of Christmas for everybody who sings."

10 of Our Favorite Christmas Carols & Hymns

Here are ten beloved Christmas carols that are from the 19th and 20th centuries and all well-known to Christians today.

"O come, O come, Emmanuel" (Latin: "Veni, Veni, Emmanuel") is a Christian hymn for Advent and Christmas. The text was first created in Latin and translated in 1861.

Refrain:
Rejoice! Rejoice! Immanuel
shall come to you, O Israel.

2 O come, O Wisdom from on high,
who ordered all things mightily;
to us the path of knowledge show
and teach us in its ways to go. Refrain

3 O come, O come, great Lord of might,
who to your tribes on Sinai's height
in ancient times did give the law
in cloud and majesty and awe. Refrain

4 O come, O Branch of Jesse's stem,
unto your own and rescue them!
From depths of hell your people save,
and give them victory o'er the grave. Refrain

5 O come, O Key of David, come
and open wide our heavenly home.
Make safe for us the heavenward road
and bar the way to death's abode. Refrain

6 O come, O Bright and Morning Star,
and bring us comfort from afar!
Dispel the shadows of the night
and turn our darkness into light. Refrain

7 O come, O King of nations, bind
in one the hearts of all mankind.
Bid all our sad divisions cease
and be yourself our King of Peace. Refrain

"The First Noel" (also written "The First Nowell") is a traditional English Christmas carol with Cornish origins, considered from the early modern period.

1 The first Noel the angel did say
was to certain poor shepherds in fields as they lay;
in fields where they lay keeping their sheep,
on a cold winter's night that was so deep.

2 They looked up and saw a star
shining in the east, beyond them far;
and to the earth it gave great light,
and so it continued both day and night. [Refrain]

3 And by the light of that same star
three Wise Men came from country far;
to seek for a king was their intent,
and to follow the star wherever it went. [Refrain]

4 This star drew nigh to the northwest,
o'er Bethlehem it took its rest;
and there it did both stop and stay,
right over the place where Jesus lay. [Refrain]

5 Then entered in those Wise Men three,
full reverently upon the knee,
and offered there, in his presence,
their gold and myrrh and frankincense. [Refrain]

"Joy to the World" is a popular Christmas carol with words by Isaac Watts. As of the late 20th century, "Joy to the World" was the most-published Christmas hymn in North America. The words of the hymn are by English writer Isaac Watts, based on Psalm 98, Psalm 96:11-12 and Genesis 3:17-18. The song was first published in 1719 in Watts' collection The Psalms of David.

1 Joy to the world, the Lord is come!

and heaven and nature sing,

and heaven and nature sing,

and heaven, and heaven and nature sing.

2 Joy to the earth, the Savior reigns!

while fields and floods, rocks, hills, and plains

nor thorns infest the ground;

He comes to make His blessings flow

far as the curse is found,

far as the curse is found,

far as, far as the curse is found.

4 He rules the world with truth and grace,

and makes the nations prove

the glories of His righteousness

and wonders of His love,

and wonders of His love,

and wonders, wonders of His love.

"O Holy Night" is a well-known Christmas carol composed by Adolphe Adam in 1847 to the French poem "Minuit, chrétiens" (Midnight, Christians) by poet Placide Cappeau (1808–1877). The carol reflects on the birth of Jesus as humanity's redemption.

It is the night of our dear Saviour's birth.

Long lay the world in sin and error pining,

Till He appear'd and the soul felt its worth.

A thrill of hope, the weary world rejoices,

For yonder breaks a new and glorious morn.

Fall on your knees! O hear the angel voices!

Led by the light of Faith serenely beaming,

With glowing hearts by His cradle we stand.

So led by light of a star sweetly gleaming,

Here come the wise men from the Orient land.

The King of Kings lay thus in lowly manger;

In all our trials born to be our friend.

He knows our need, to our weaknesses no stranger,

Behold your King! Before Him lowly bend!

Behold your King, Before Him lowly bend!

Truly He taught us to love one another;

His law is love and His gospel is peace.

Chains shall He break for the slave is our brother;

And in His name all oppression shall cease.

Sweet hymns of joy in grateful chorus raise we,

Let all within us praise His holy name.

Christ is the Lord! O praise His Name forever,

His power and glory evermore proclaim.

His power and glory evermore proclaim.

"Hark! The Herald Angels Sing" is a Christmas carol that first appeared in 1739 in the collection Hymns and Sacred Poems. As it is known in the modern era, it includes lyrical supplements from Charles Wesley and George Whitefield, two of the founding ministers of Methodism, with music adapted from "Vaterland, in deinen Gauen" by Felix Mendelssohn.

"Glory to the newborn King!

Peace on earth and mercy mild

Join the triumph of the skies

With the angelic host proclaim:

"Christ is born in Bethlehem"

Late in time behold Him come

Offspring of a Virgin's womb

Veiled in flesh the Godhead see

Pleased as man with man to dwell

Hail the heaven-born Prince of Peace!

Hail the Son of Righteousness!

Light and life to all He brings

Ris'n with healing in His wings

Mild He lays His glory by

Born that man no more may die

Born to raise the sons of earth

Born to give them second birth

"Silent Night" is a popular Christmas carol, composed in 1818 by Franz Xaver Gruber to lyrics by Joseph Mohr in the small town of Oberndorf bei Salzburg, Austria. The song has been performed by many singers across various music genres. Bing Crosby's version from 1935 is the fourth best-selling single of all-time.

All is calm, all is bright

’round yon virgin mother and child!

Holy infant, so tender and mild,

Shepherds quake at the sight.

Christ the Savior is born!

Christ the Savior is born!”

radiant beams from Thy holy face

with the dawn of redeeming grace,

Jesus, Lord, at Thy birth!

Jesus, Lord, at Thy birth!

with the angels let us sing

"Alleluia" to our King:

“Christ the Savior is born!

Christ the Savior is born.”

The English translation of "O Come, All Ye Faithful" by the English Catholic priest Frederick Oakeley, written in 1841, is widespread in most English-speaking countries.

Come and behold him

Born the King of Angels:

God of God, light of light,

Lo, he abhors not the Virgin's womb;

Sing, all ye citizens of Heaven above!

Glory to God, glory in the highest:

Jesus, to thee be glory given!

Word of the Father, now in flesh appearing!

8. What Child Is This

"What Child Is This?" is a Christmas carol whose lyrics were written by William Chatterton Dix, in 1865. While healing from a severe illness, he experienced a spiritual renewal that led him to write numerous hymns, including lyrics to this carol that was later set to the tune of "Greensleeves", a traditional English folk song.

1 What Child is this, who, laid to rest,

On Mary's lap is sleeping?

Whom angels greet with anthems sweet,

While shepherds watch are keeping?

This, this is Christ, the King,

Whom shepherds guard and angels sing:

Haste, haste to bring Him laud,

The Babe, the Son of Mary!

2 Why lies He in such mean estate,

Where ox and ass are feeding?

The silent Word is pleading.[Chorus]

3 So bring Him incense, gold, and myrrh,

Come, peasant, king to own Him.

The King of kings salvation brings;

9. We Three Kings of Orient Are

"We Three Kings", original title "Three Kings of Orient", also known as "We Three Kings of Orient Are" or "The Quest of the Magi", is a Christmas carol that was written by John Henry Hopkins Jr. in 1857. At the time of composing the carol, Hopkins served as the rector of Christ Episcopal Church in Williamsport, Pennsylvania, and he wrote the carol for a Christmas pageant in New York City. Many versions of this song have been composed and it remains a popular Christmas carol today.

1 We three kings of Orient are;
bearing gifts we traverse afar,
field and fountain, moor and mountain,
following yonder star.

2 Born a King on Bethlehem's plain,
gold I bring to crown him again,
King forever, ceasing never,
over us all to reign. [Refrain]

3 Frankincense to offer have I;
incense owns a Deity nigh;
prayer and praising, voices raising,
worshiping God on high. [Refrain]

4 Myrrh is mine; its bitter perfume
breathes a life of gathering gloom;
sorrowing, sighing, bleeding, dying,
sealed in the stone-cold tomb. [Refrain]

5 Glorious now behold him arise;
King and God and sacrifice:
Alleluia, Alleluia,
sounds through the earth and skies. [Refrain]

The well-known hymn "Ave Maria" actually originates from "Ellen's Third Song", a song written by Franz Schubert in 1825 as part of his Op. 52, a setting of seven songs from Sir Walter Scott's famous classic poem The Lady of the Lake. Ave Maria is the Latin name of the prayer Hail Mary, and also the opening words and refrain of Ellen's song, a song which is itself a prayer to the Virgin Mary. "Ave Maria" was composed in three variants for piano by Franz Liszt.

Discover the Stories behind these Christian Christmas Songs: