7 Popular Hymns For A Baptism Service 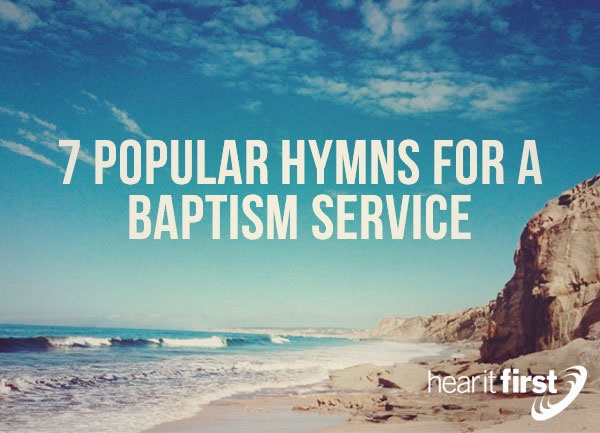 Acts 2:38 ESV - And Peter said to them, “Repent and be baptized every one of you in the name of Jesus Christ for the forgiveness of your sins, and you will receive the gift of the Holy Spirit.

1 Peter 3:21 ESV - Baptism, which corresponds to this, now saves you, not as a removal of dirt from the body but as an appeal to God for a good conscience, through the resurrection of Jesus Christ

Romans 6:4 ESV - We were buried therefore with him by baptism into death, in order that, just as Christ was raised from the dead by the glory of the Father, we too might walk in newness of life.

Here are seven great hymns for a baptism service.

Blessed Redeemer by Casting Crowns showcases the walk to Calvary or the so-called “Via de la Rosa” or “the way of misery.”  Just hearing the lyrics takes you to the cross as it “Seems now I see Him on Calvary's tree. Wounded and bleeding, for sinners pleading. Blind and unheeding, dying for me.”  That is what made them run to the cross; for mercy and forgiveness and then, not long after that, it is followed up with a believer’s baptism.  The blessings of being redeemed are incalculable.

There is a Fountain Filled with Blood

This is a very old Christian hymn written by William Cowper in 1772, this majestic work of poetry and song has moved many to faith in Christ.  The words are relevant for any time we worship but even more so for the newly converted saint who was just “plunged beneath the flood,” “filled with blood, drawn from Immanuel’s veins” at the cross.  This is how they can sing, “lose all their guilty stains,” and have “Washed all my sins away” for this overwhelming flood “ransomed the church of God.”

The worship song, “Grace Like Rain” by Todd Agnew is so optimistic and joyful for the person who’s had their sins washed away and been cleansed by the blood of the Lamb.  It’s grace, like rain, that washes us clean and to be seen as having Jesus’ righteousness is grace to the greatest (2nd Cor 5:21).   All our sins are washed away,” he sings, “washed away, washed away” so “Hallelujah.”  It’s like Todd Agnew took John Newton’s “Amazing Grace” and compared it to an overwhelming flood that washes all our sins and stains away…forever!

Nothing but the Blood

“Who Am I” was a Christian rock song recorded by Casting Crowns, written by Mark Hall and released in 2004, this song focuses on the humility and unworthiness of the sinner about to be plunged beneath the water and truly I can say, it was “Not because of who I am. But because of what You've done. Not because of what I've done. But because of who You are.”  The Apostle Paul’s words to the Romans that “We were buried therefore with him by baptism into death, in order that, just as Christ was raised from the dead by the glory of the Father, we too might walk in newness of life” (Rom 6:4) as coming up out of the water is symbolic of the death of the old man and the new creation in Christ coming up (2nd Cor 5:17).

Come to the Water

Something in the Water

Carrie Underwood’s song, “Something in the Water,” included vivid images of water baptism as she sings, “I followed that preacher man down to the river.  And now I'm changed.  And I'm stronger. There must've been something in the water.” This is just what baptism symbolizes; a new creation because the person being baptized, like all of us, is commanded to repent and be baptized after having placed our trust in Christ.   Chris Destefano and Brett James combined to write a moving, passionate song that seems well suited for baptism, either before or after.

I am sorry if I left one out that you believe should be included.  If so, please comment and let us know what it is. I know that each person may have a special song that they love which for them is perfectly suited for their own baptism.  What matters is that they have repented and trusted in Christ and that’s what saves them (Acts 4:16:30-31).  No one can be saved any other way (Acts 4:12).  Have you been saved but never been baptized?   Why not? It’s an outward, public sign of an inward conversion but it takes humility.  By being baptized, you are making a public profession of faith and obeying the command to be baptized, and now it’s your turn to go and make disciples of all nations so that they can also be baptized into the name of the Father, the Son, and the Holy Spirit (Matt 28:19-20).