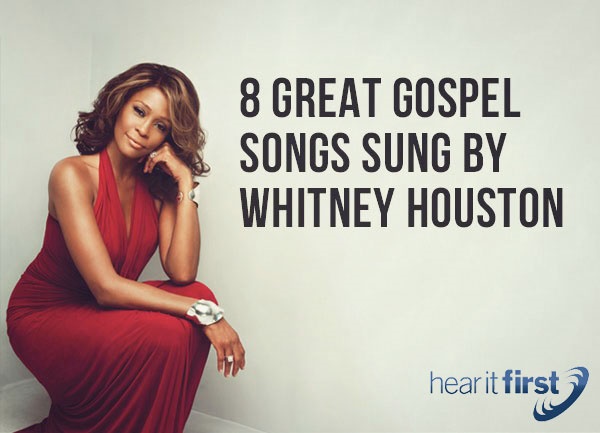 Here are 8 great gospel songs by Whitney Houston for you to enjoy.

I Look to You

The album, “I Look to You,” released in 2009, was the last album that the late Whitney Houston would ever produce and it was fitting that she would sing, “As I lay me down. Heaven hear me now. I'm lost without a cause. After giving it my all” from the song, “I Look to You” and then shortly after this, would pass into eternity.  Some of her fans have said, “It’s like she’s singing goodbye” and interestingly, it ended up being that way.

Not only is “Jesus Loves Me” one of the all-time gospel songs, it was one of Whitney Houston’s favorites.  The words are just as relevant today as in the day in which it was written, which was by Anna Bartlett Warner in 1860.  This song was originally a poem form the novel, “Say and Seal” written by her oldest sister, Susan Warner.  This is one of the most inspirational songs that Whitney Houston ever sang with the powerful lyrics, “Jesus loves me for the Bible tells me so. Jesus loves me this I know. For the Bible tells me so. Little ones to him belong. They are weak but he is strong” and to which I believe we can all identify with.

Hold on, Help is on the Way

The song, “Hold on, Help is on the Way” is full of devotional praise that God never fails us and to take heart for “He’s coming soon” so “when it seems that you can't stand. Just hold on to God's unchanging hand” because “Help is on the way” from heaven above.  This song, from the movie, The Preacher’s Wife, is one of the strongest and most inspirational songs from the movie’s soundtrack and you will be inspired by it, I am sure.

The song, “Precious Lord, Take My Hand” was one of her own, personal favorites and with lyrics that we can all appreciate from time to time as it says, “Precious Lord, take my hand. Lead me on, let me stand. I'm tired, I'm weak, I'm worn” and as a prayer, Whitney sings, “Guide my feet, hold my hand. Take my hand precious Lord. Lead me home,” and which we all feel very much the same about our coming, glorious Savior, Jesus Christ.

I Love the Lord

The song, “I Love the Lord” is from her audio CD and is also from the movie, “The Preacher’s Wife” where Whitney sings, “he heard my cry. And pitied every groan, yes he did. Every groan” which reminds me of Romans 8: where Paul says of our prayers, “the Spirit helps us in our weakness. For we do not know what to pray for as we ought, but the Spirit himself intercedes for us with groanings too deep for words” (Rom 8:26).  Every groan, every moan, ever cry is heard by God while she sings, “Tears are streaming down my eyes. I'll hasten, I'll hasten to his throne” which are very biblical lyrics to be sure.

His Eye is on the Sparrow

Whitney Houston’s rendition of “His Eye is on the Sparrow” is sung by her like no other artists I’ve ever heard sing it.  This song was written over a century ago, in 1905 by Civilla D. Martin and was based upon Matthew 6:26 where Jesus said “Look at the birds of the air: they neither sow nor reap nor gather into barns, and yet your heavenly Father feeds them. Are you not of more value than they” and so Whitney sings, “When Jesus is my portion. A constant friend is He. His eye is on the sparrow. Oh yes, I know. He watches over me.”

I Go To the Rock

Joy to the World

The song, “Joy to the Word” sung by Whitney Houston and written by the English hymn writer, Isaac Watts, this song is about the glorifying arrival of the Son of God in Jesus Christ and His triumphant return.  It’s no wonder that as of the late 20th century, “Joy to the World” was the most frequently published Christian hymn ever.  Most people don’t need the lyrics to sing along as we’re all very familiar with the joyful chorus, “Joy to the world! The Lord is come; Let earth receive her king; Let every heart prepare him room, And heaven and nature sing, And heaven and nature sing, And heaven, and heaven, and nature sing.”  Whitney does an extraordinarily superb rendition of the song that may be the most familiar of all Christmas songs.

Most of us cannot think of a female artist that is comparable to Whitney Houston and when you team the inspiring voice of hers with inspiring and biblical lyrics, you’ve got a combination of must that will surely inspire you and make you think about the kingdom of God and for His arrival, praying “Even so Lord, come quickly,” just as the Apostle John writes, “He who testifies to these things says, “Surely I am coming soon.” Amen. Come, Lord Jesus” (Rev 22:20)!

A Prayer of Healing for Sick Family and Friends - Your Daily Prayer - August 3The burden of healing doesn’t lie in saying just the right words. That should free us all up to pray a little more boldly for God to heal.