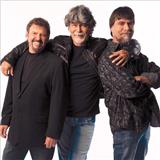 It's been 40 years since a trio of young cousins left Fort Payne, Alabama, to spend the summer playing in a Myrtle Beach, South Carolina, bar called The Bowery. It took Randy Owen, Teddy Gentry and Jeff Cook six long years of tip jars and word of mouth to earn the major label deal they'd been dreaming of, but then seemingly no time at all to change the face of country music.
ALABAMA is the band that changed everything. They reeled off 21 straight #1 singles, a record that will probably never be equaled in any genre. They brought youthful energy, sex appeal and a rocking edge that broadened country's audience and opened the door to self-contained bands from then on, and they undertook a journey that led, 73 million albums later, to the Country Music Hall of Fame and the Hollywood Walk of Fame.
ALABAMA & Friends commemorates that summer at The Bowery and catalogues the lasting influence the group has had on generations of Country stars who draw inspiration from the sparkling harmonies, irresistible stage presence and world-class songwriting and song selection that made them superstars. It brings together some of Country's biggest stars, each bringing a unique musical approach to classic ALABAMA songs that have influenced them.
The diversity and star power of the artists speaks volumes about the breadth and depth of ALABAMA's legacy. Contributing their own versions of Alabama classics are Jason Aldean, Luke Bryan, Kenny Chesney, Eli Young Band, Florida Georgia Line, Jamey Johnson, Toby Keith, Rascal Flatts, and Trisha Yearwood.
"I thank God I'm here to see these great artists see fit to sing some of the songs we did," says Randy, with the Everyman sincerity that has helped so many identify with the humbly born superstars.
"It's very much an honor," adds Jeff, "that they'd take part in an ALABAMA tribute. We had a lot of fun working with them, and I think the finished product testifies to both the fun and the quality that went into it."
The songs chosen for the project represent just the tip of the iceberg that is the band's catalog, but they speak, to hear Teddy tell it, to the key to the band's legacy.
"More than anything," he says, "our longevity is a tribute to the hard work we did in selecting songs, because it's the songs that people remember."

The songs here are, of course, among the most memorable in country history. Included are "My Home's In Alabama," the band's first major hit and the song that introduced them to the world; "Tennessee River," their very first #1; "Old Flame" and "Love in the First Degree," from their second RCA album; "Lady Down On Love," a harmony-laden example of Randy's songwriting prowess; "The Closer You Get," released halfway through their streak of 21 chart-toppers; "She And I," from the mid-'80s; and "Forever's As Far As I'll Go" and "I'm In A Hurry (And Don't Know Why)," which helped kick off the '90s, in which the boys earned 29 more chart hits, including 22 #1 or Top 5 singles.
Capping the project are two new tracks by ALABAMA, songs that find the band making music that sounds both classic and relevant. They worked with legendary producer Harold Shedd, who worked with them in those golden early days and went on to discover Shania Twain, Toby Keith and many others.
"I suggested to Jeff and Teddy that Harold work with us on the new stuff," says Randy, "and they agreed. It was spine-tingling when he said yes. It's a story-book episode in my life and in the career of ALABAMA to have Harold being on board and to see him as excited as we were after all these years."
"We hadn't worked together in years," adds Shedd, "but within a couple of hours we had some things that sounded like ALABAMA did in 1980. It was like ALABAMA reborn."
"I always worry about putting out anything new at this point," Teddy says with a laugh, "knowing it has to stand up to a pretty strong track record," but agrees the new material does just that. He calls "That's How I Was Raised" "right down the heart of the plate simple country song that showcases our harmonies," and "All American" "a song that says a lot of things that need to be said about our country."
The project came about as the trio realized their 40th anniversary was at hand.
"We got to talking and said, 'Let's do some shows and play some of the places we haven't played before, like the Ryman and the Fox Theatre in Atlanta,’" says Teddy.
"We kicked off the tour in Myrtle Beach and took our music back to our fans," adds Jeff. "We've all done enjoyable projects separately in the years since our last tour, but we all realize we're stronger as a unit."
"And then as we talked," says Randy, "we started talking about a CD project and maybe getting some other artists involved."
The format they chose enables them to celebrate those humble beginnings and their stratospheric accomplishments. Of the former, Jeff says, "I don't think we thought too far ahead. We were more concerned with paying our bills at the end of the week playing music."
The Bowery was a chance to get established outside their home turf, where they'd played a nearby theme park, opening for national acts like Bobby Bare.
"We believed we had something pretty special from a vocal standpoint," says Teddy, "and we were looking for the opportunity to prove it. There were a lot of times when we wondered whether we might be better off going back home and getting jobs, but we just kept rehearsing and writing songs, trying to get better and believing we could do it."


"I went to see them at The Bowery," says Shedd, "and the sound that these three guys could create together was just really something. I saw the crowd reacting to music they'd never heard before as though they had. They were doing some covers, but a lot of the ALABAMA show at the time was original material, including stuff that wound up on the first three albums we did together."
The band was revolutionary in more than one sense.
"We were renegades in sneakers and T-shirts," says Teddy. "We had long hair and played loud and some of the country folks resisted us for a while. But then of course they did accept us and then after that, our success made it lots easier for other bands to try it in country music."
The fact that some of the heirs of that legacy--Eli Young Band, Rascal Flatts and Florida Georgia Line--are among the stars paying tribute on Alabama & Friends is part of their legacy as surely as the awards and plaudits they've earned through the years. And those, of course, have been legion. They include more than 150 major industry nods, including two Grammys, the Minnie Pearl Humanitarian award, Entertainer of the Year awards three times from the CMA and five times from the ACM, as well as the latter's Artist of the Decade award. They earned 21 Gold ®, Platinum ® and Multi-Platinum ® albums and were named the RIAA's Country Group of the Century.
But awards are only a part of a legacy that finds its most important home in the hearts of listeners everywhere. Some of those are superstars in other genres, as Randy found out not long ago.
"I was part of a benefit concert at the Ryman," he says, "and I look over there's Jon Bon Jovi. He walked over and said hello and it turns out he likes our music."
Many more, of course, are everyday country fans.
"A lot of fans will start a conversation with, 'I don't want to bother you,'" says Jeff, "but what they don't understand is that everything that's happened to us, every one of those awards, happened because we've been accepted and supported by our fans."
Not long ago, Teddy was witness to a scene that shows that their legacy of song remains as fresh as it was when that streak in the '80s kicked it all off.
"I was in Nashville," he says, "walking by this club full of young people--I'm talking 18 or 20. The band started playing 'Dixieland Delight' and everybody in the place started singing and sang all the way through. I had to smile at the longevity of the songs. Maybe some of those kids didn't even know who ALABAMA was, but they knew the music, and so I think that's a tribute to the fact that we spent a career putting out good songs that stand the test of time."
With ALABAMA & Friends, all of us who agree get to celebrate that accomplishment and its legacy one more time.

The Story Behind The Touching Alabama Song 'Angels Among Us' 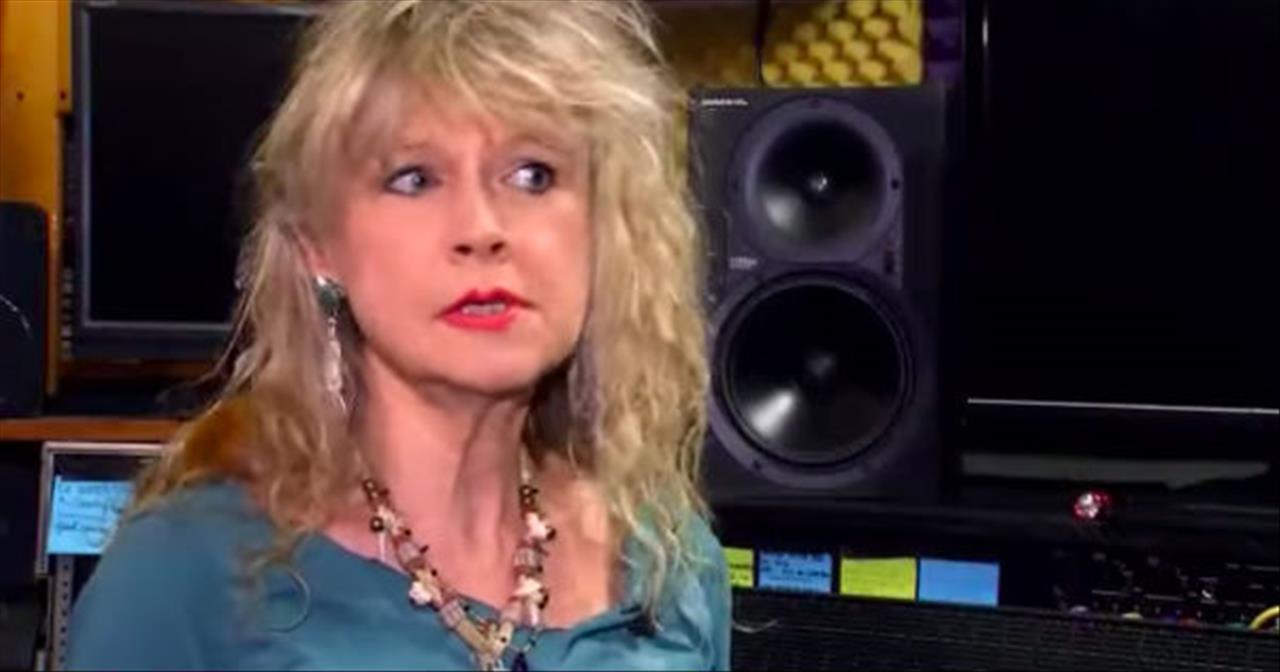 You may have heard this touching song, but here’s the story behind Alabama’s “Angels Among Us”. “I believe, well, everything’s from God,” songwriter Becky Hobbs shared. Becky recalled having premonitions of dying in the mid 1980’s. “I would be almost in the dream state, but I’d feel like an impact. And I’d sit up in bed and my heart would be pounding.” On her birthday, January 24, 1986, something scary happened to her. The premonition seemed to become a reality. “An energy took ahold of my arm and pulled me out into my front yard. This front yard out here. I stood under a little maple tree and I looked up at the clear January sky. And I heard a very loud masculine voice, ‘Be careful, this may be your last birthday.’” The next day she traveled on the road with her band. Stuck at a red light she noticed a big rig 18-wheeler driving down the road toward the intersection, but it was moving so fast she knew it was not going to stop on time. “I looked out the left window of the Dodge Maxi van. And there was an 18-wheeler just barreling towards the intersection and I thought, ‘My God if this light turns red he’s not gonna be able to stop.’” They were hit by the truck. The car was totaled. Their vehicle spun, its trailer breaking off from the impact. The entire band was thankfully safe and only had minor injuries. She took her experience as a warning from a guardian angel. Back at home, she sat at her piano and wrote lyrics to the song. She wrote as much as she could before getting stuck in the process. “I had what I felt like was a real compelling melody, but that was all I could get. I couldn’t get the verses. The verses wouldn’t come to me.” About 10 years passed and for no reason the song came to mind for Becky again. She called up her co-writer Don Goodman in 1993 and shared the song with him. They had two writing sessions and finished the song. Within two weeks the song was recorded and complete. The song was such a hit upon its release that Alabama released a book of letters submitted by fans with encouraging stories of their own “angels.” Knowing that God is after our protection and wants us to live safely and holy is an idea confirmed in scripture. “For I know the plans I have for you”—this is the Lord’s declaration—“plans for your well-being, not for disaster, to give you a future and a hope.” (Jeremiah 29:11) We can strive to live life unafraid because God has such great plans for us. And if we find ourselves lost, in despair, we can have hope. God may just send an angel our way because He can make miracles happen. Always