Hymns of Our Fathers - 19 of Our Presidents' Favorite Worship Songs 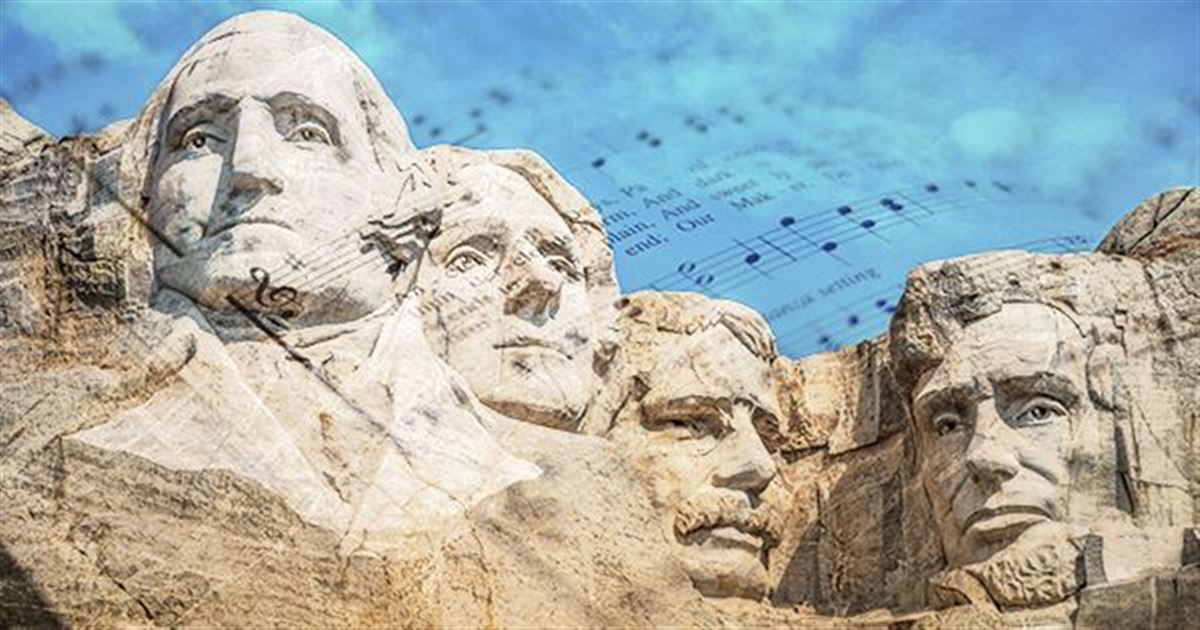 Music holds a special part in most everyone’s life. Check out the list below to see how 19 of our presidents regarded music and what each of their favorite hymns were! These hymns may have been influential during their presidential years or meant something special to them and their spiritual development. Do you have a favorite hymn that you just can’t help but sing whenever you hear it?

George Washington: “How Happy is He Born and Taught”

Our first president loved music, even though he could not play any instruments. George and Martha Washington did love hymns and would sing hymns to their children every night before bed. He was also one of the first two Americans to buy an American made piano. Washington’s favorite hymn, “How Happy is He Born and Taught,” is based on Psalm 67.

Thomas Jefferson was one of our most musical presidents and was a very skilled violin player. His wife was also a talented musician. Jefferson was a Baptist and attended a church near Charlottesville, VA. He went to college at William & Mary and there he played violin duets with his friend, Patrick Henry. Jefferson’s favorite hymn, “Hark, The Glad Sound the Savior Comes,” was written in 1735 by Philip Doddridge.

James Buchanan was the only president who was a bachelor. He had adopted his orphaned niece, Harriet Lane, who took on the role as the official hostess of the White House. His favorite hymn, “God Moves in a Mysterious Way,” was written by William Cowper in 1773. The title of the hymn has become a popular saying, encouraging people to trust God in the face of trouble or uncertainty.

Abraham Lincoln: “How Tedious and Tasteless the Hours”

Abraham Lincoln’s mother taught him many hymns growing up before she passed away when he was 9 years old. He loved listening to hymns and singing, but the only time he sang a solo was for his older sister’s wedding. Lincoln was the only president to have a singing chaplain. His favorite hymn, written by John Newton, was “How Tedious and Tasteless the Hours.”

Rutherford B. Hayes: “Rock of Ages, Cleft for Me”

Rutherford B. Hayes and his wife Lucy were abolitionists. They were also prohibitionists and banned all alcohol from the White House. After leaving the White House, Hayes devoted himself to many humanitarian issues including educational issues and prison reform. His favorite hymn was “Rock of Ages, Cleft for Me.”

William McKinley was a Methodist and quite a good singer. He was assassinated at the beginning of his second term at the World’s Fair. On his deathbed, he was singing his favorite hymn, “Nearer My God, to Thee.”

Theodore Roosevelt: “How Firm a Foundation”

President Woodrow Wilson was a good Christian man who said grace at every meal, read his Bible regularly, and attended weekly prayer meetings. He was also a talented singer who loved to sing to the accompaniment of a harp. His favorite hymn was “When Peace Like a River,” a popular song that brings comfort to many.

Warren G. Harding was our first Baptist president. He was also the only president who could play every instrument in a brass band except for the trombone and E-flat clarinet. His favorite hymn was “Lead, Kindly Light.” The song was written by John Newman while he was on an orange boat traveling from Sicily to France.

Calvin Coolidge: “O Love That Will Not Let Me Go”

Calvin Coolidge became president after Warren Harding passed away on a train during the second year of his presidency. His wife, Grace Coolidge, was known as ‘Little Miss Sunshine’ by the Secret Service. His favorite hymn was the popular, “O Love that Will Not Let Me Go.”

Franklin D. Roosevelt was an only child. His mother taught him piano, and at the age of 14, he started singing lessons at the boarding school he attended. At 15 years of age, Roosevelt taught himself how to play the organ and played hymns at revivalist meetings. His favorite hymn was “Art Thou Weary, Art Thou Languid.”

Dwight D. Eisenhower: “What a Friend We Have in Jesus”

Dwight Eisenhower was a Presbyterian, and he was the first president to have a presidential prayer breakfast. Billy Graham spoke at the event, and the two remained friends until Eisenhower’s death. His favorite hymn was “What a Friend We Have in Jesus.”

John F. Kennedy was our only Catholic president. He was fond of the arts and supported the National Culture Center plans, which then became the Kennedy Center for the Performing Arts. His favorite hymn, “Holy God, We Praise Thy Name,” has had wide circulation in both Catholic and Protestant hymnals.

Richard M. Nixon: “He Will Hold Me Fast”

President Nixon was a talented musician and could play the piano, violin, clarinet, and saxophone. He was also a Quaker and played the piano for a Quaker meeting house in California. While he was in the White House, he put on 26 worship services. “He Will Hold Me Fast” was known as his favorite hymn.

Jimmy Carter was the first president to be born in a hospital. He was raised on his family’s farm and grew up going to a Baptist church. His favorite hymn was the popular song “Amazing Grace, How Sweet the Sound.” This has become the most recorded tune in the history of the recording industry starting in 1922.

RELATED: Former President Jimmy Carter Talks About His Faith And His Life

George H. W. Bush was a talented singer and was a member of the Yale glee club. He enjoyed country and western music because of the stories that those songs would tell. He was a war hero and Navy veteran, which is why the Navy hymn “Eternal Father, Strong to Save” was his favorite.

Bill Clinton: “In the Presence of Jehovah”

President Clinton grew up in Arkansas and became a Christian at the age of 9 years old. Growing up he enjoyed music and loved singing hymns, especially gospel music. In high school, he played the tenor saxophone. He even played his saxophone on Johnny Carson’s television show while he was the governor of Arkansas. His favorite hymn is “In the Presence of Jehovah.”

George W. Bush: “A Charge to Keep I Have”

George W. Bush was a fan of hymns. He would even use parts of stanzas from hymns in his speeches sometimes. His favorite hymn is “A Charge to Keep I Have” and even had a painting in the White House that was named with that same title. Charles Wesley wrote this hymn in 1762 and based it on Leviticus 8:35. The song is very popular with the Methodist church.

YOU MAY ALSO LIKE: Bizarre Facts About U.S Presidents That Sound Unbelievable But Are True

A Prayer for the Teachers, Mamas, and Anyone Who Wants to Give Up - Your Daily Prayer - September 22

We may never get recognition for the time we put in. But, there is One who sees us. And He matters most.