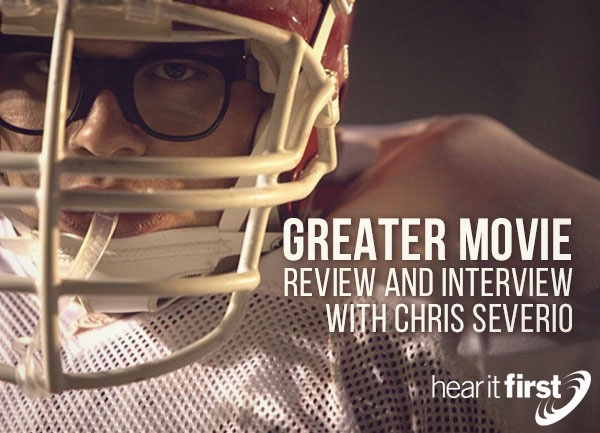 “Our loss is great. God is greater.” ~Greater

“I’ll Fly Away” softly plays as the camera takes you for birds eye view of what I assume is the countryside of Harrison, Arkansas. The scene is set for the story to be told of the inspiring life and tragic death of Brandon Burlsworth. By the end of the movie, however, the theme of God’s love will clearly become the star of the show. The movie Greater, as evidenced by Brandon’s life, testifies to God’s faithfulness even when, and especially when, life doesn’t make sense.

“Just because we don’t see the point, doesn’t mean there isn’t one.” ~Greater

In my conversation with Chris Severio (Brandon Burlsworth), I asked him what he thought viewers might be surprised about the most. Severio stated that while some might think the trailer tells too much of the story, it’s not only about the tragedy of Brandon’s death. It is also very much about the story of those who loved and supported him, especially his brother Marty (Neal McDonough) and his single mom. Chris said that the movie, for him and for anyone who sees it, will bring clarity to the often-asked question, “Why do bad things happen to good people?”

As the movie canters back and forth in time, it weaves together the story of Brandon Burlsworth’s life. We get an inspiring glimpse of, how in spite of life’s knockdowns and challenges, Burlsworth got up, did the hard work to fulfill his dreams and passions and stayed true to his faith. You could say that he carried out his own life’s version of the Pilgrim’s Progress. “You can’t just trust. You have to obey too.”  ~Leslie Easterbrook (Barbara Burlsworth), Greater

Greater is one of the most inspirational movies I’ve seen in a while. This true story of a driven young man who boldly lived out his faith in all circumstances and had passion for cheesecake and football scores a touchdown for the win. It’s a must see whether you like football or not. Be watching the movie’s website for more information and the release date. GreaterTheMovie.com

Now I invite you to join me in a very honest and enlightening conversation I had with Chris Severio (Brandon Burlsworth). Chris was such a pleasure to chat with. He made the interview seem like we were sitting down and chatting over coffee. I hope you enjoy this conversation as much as I did.

What actors have inspired you in your career?

Chris Severio: Ironically, Neal McDonough (Marty Burlsworth). As a child I watched everything he’s done. I fell in love with not just his acting but his characters and what he did with them. In Greater, I got to play along side Neal McDonough. I’ve never been star struck in my life but I was shocked to walk on the set to see I would be working with him. He’s a wonderful man and I get to call him a friend now. I also gain inspiration from two other great character actors, Michael Shannon and Ben Faulkner.

What keeps you inspired to act?

Chris Severio: I’m very proud of Greater and I enjoyed watching it but what keeps me going is being able to create something. I like the acting process and the challenges probably more than the finished product. But when I’m able to do that well and the finished product comes I like the feedback – positive and negative.

Was there anything that surprised you during the filming process of Greater?

Chris Severio: This was my first lead role. I was so surprised at how hard this job really was. I say job because I’m there to be something and work my hardest and do my best. When I got in deeper with the story of who Brandon was, I was surprised at how close me and Brandon’s lives have gone along the same path. It was a dream come true for me. But when I met his family and felt how loving and accepting they were and realized they and the producers were trying to share a story, it was no longer about my dream. It was a chance to do something for somebody else. To be able to give them something to be proud of was my gift to them.

What’s the biggest challenge about taking on this role?

Chris Severio: Learning Brandon’s movements and steps. I had to learn how to be coordinated. As an actor, it was fairly easy to relate to Brandon but to portray him and do him justice was difficult. Also, working with his family and friends and community on the set put pressure on me, in a good way, to work hard so the film would honor them.

Chris Severio: As I speak today I am more comfortable talking but I am an introvert like Brandon was. More closed off, not a partygoer and very focused on whatever task I set my mind to – like Brandon. I was able to relate to Brandon on a personal level. Our lives of adversity and fighting to overcome were similar. I’m different from Brandon in the area of football. I never played football a day in my life. I had a lot to learn and needed a lot of help. If I ever have a regret it life it would be that I didn’t play in high school. I fell in love with football.

I’ve read that this movie is not just about Brandon’s story. How has being a part of this movie changed you? Has anything from Greater affected your faith journey?

Chris Severio:  I’m a Christian and was raised a Christian. As I got older I fell off the path and had my own questions and my own doubts. “Is He really there?” I would talk to God often but would never know if he ever answered me. After filming, I came home and was outside on my back porch relaxing. I got to thinking about being successful and proving I could do something great with my life. I went back and read the screenplay and started remembering everything I’ve done. If it wasn’t for God I wouldn’t be here. I wouldn’t be able to do what I love. I felt Him in that moment. I was looking for a sign on the outside but I realized it happened within me. Brandon’s life taught me a lot. Brandon showed me a lot of my faults as a person and made me want to better myself and to be closer to God.

I know you hope everyone will go see it but what type of person do you think Greater will really affect?

Chris Severio: People like me in my age range. Mid 20’s. A lot of young adults as they start going through life go through a lot of difficulties. You have bills, jobs, you get married and start worrying and stressing - your faith gets questioned. This film can show them that with hard work and focus and even in tragedy, God is still there to take care of you. It’s the bigger picture. There’s something Greater than what you’re going through.

Were any lasting relationships formed during the filming process?

Chris Severio: I gained a good friend. The actor who played Grant Garret , his name is Grant Cook. Throughout filming we got pretty close. Grant Garret was one of Brandon’s best friends. When we got to the end of filming I noticed that when we weren’t filming we hung out a lot. He saw me going through the emotional times during filming and he was there talking to me as a friend. I’ll never forget him.

What, in your mind, would make Greater a success?

Chris Severio: Greater will be a success to me if people go see it. I know that people are going to walk away feeling different. It’ll be a success if the message is conveyed.

“You should definitely see it. I feel that it’s going to touch everyone in an amazing way.” ~Chris Severio

Keep up with Chris Severio on:

I’m a born-and-raised Texan who enjoys any adventure that requires a passport. As a Christ-following pilgrim, I’m a lover of stories and a connoisseur of sunrises and coffee - best when served together. I listen to a wide range of musicians with Andrew Peterson, Jimmy Needham and Bethel Music being just a few of my favorites. When I’m not writing, you’ll find me in the kitchen or spending time with those I love.