5 Major Differences Between Christianity and Islam 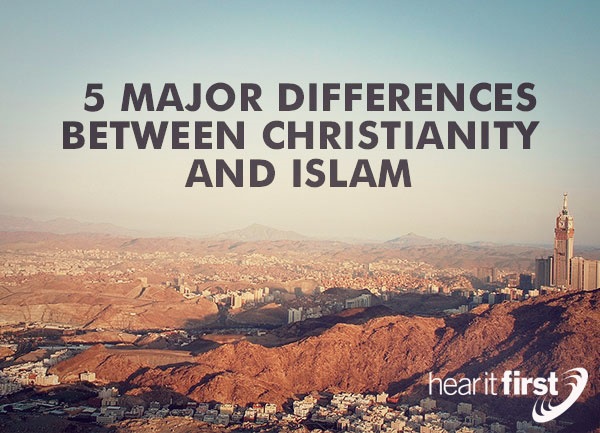 Here are 5 of the major differences between Christianity and Islam

We know that if a person repents of their sins (turns away and forsakes them) and puts their trust in Christ, they will not only be saved, they will have their sins taken away.  In the Old Covenant, sins were only covered but the blood of Christ washes them all away and does so forever.  Christians know that God the Father placed the wrath of God upon His One and only Son so that we wouldn’t have to face the wrath of God on Judgment Day (Rev 20:12-15).  With Islam, you only have the hopes that you did enough good to make it into the kingdom but you are never really sure.  You also have no means of having your sins forgiven and your only hope in Allah is to die a martyr’s death by taking out the “infidels” (non-Islamic) of the world.  In this case, their god is not a just god because the True God cannot overlook sin by sweeping it under the carpet or cancelling it out for doing good things.  If you do not pray five times a day and do so at the exact time, you are in big trouble with Allah. If you didn’t fast during Ramadan then you have no way to undo that.  You can do penance by doing “good works” but it’s impossible to tell exactly how many good works it takes to enter into Paradise.  Christians know that good works are worthless before God (Isaiah 64:6) because eternal life is a free gift (Eph 2:8-9). With Christianity, Jesus’ work takes away the sins but with Islam, you’ve got lots of “good works” to do and just have to hope it goes well after death.

I wrote somewhat about this in the above paragraph, but if you know your sins are forgiven, you’ve got a more peaceful conscience.  The weight of sin or the guilt of sin is a heavy burden that’s humanly impossible to bear.  This may be part of the reason why Jesus said “Come to me, all who labor and are heavy laden, and I will give you rest” (Matt 11:28) because living in sin does make you tired.  You can’t carry that load by yourself.  I can’t, but we can rest in Him and that’s very reassuring but sadly, with the Islamic faith, a person can only be saved by doing enough good works and living righteously.  The Quran teaches that man is born sinless but only becomes sinful due to human weaknesses.  Your eternity depends on the scales being in your favor of having done more than enough good works to outweigh the sins; the righteousness must outweigh the evil (Surah, 23:101-103). There is never really any feeling of assurance or certainty and so it becomes a “hope-so” faith throughout their lives, unlike Christianity, which is a “know-so” faith.  Instead of “I hope so” it’s “I know so!”  Jesus told His disciples “My sheep hear my voice, and I know them, and they follow me.  I give them eternal life, and they will never perish, and no one will snatch them out of my hand.  My Father, who has given them to me, is greater than all, and no one is able to snatch them out of the Father's hand.  I and the Father are one” (Matt 10:27-30).  That sounds very certain to me.

Loving and Praying for our Enemies

What do we do to those who hate us and persecute us and are of a different religion than we are or may have no religious affiliation at all?  Jesus tells us in Matthew 5:3-44 “You have heard that it was said, ‘You shall love your neighbor and hate your enemy.’ But I say to you, Love your enemies and pray for those who persecute you” so one of the most significant differences is that Islamist’s seek to expand and assimilate the world into Islam and death to those who reject Allah but for believers, we pray for those who abuse us, persecute us, despise is, and certainly we week them no harm.   Not only do we pray for our enemies but we love them too!  That’s so radical that there is no faith that compares to it.  Jesus tells us to pray for and love our enemies but Islam teaches “And KILL them (the unbelievers) wherever you find them, and drive them out from whence they drove you out, and persecution is severer than slaughter, and do not fight with them at the Sacred Mosque until they fight with you in it, but if they do fight you, then slay them; such is the recompense of the unbelievers” (Surah 2, 191).

There are remarkably different teachings in the Bible and in the Quran.  Regarding the value of women, the Bible teaches that “There is neither Jew nor Greek, there is neither slave nor free, there is no male and female, for you are all one in Christ Jesus” (Gal 3:28) and men and women are co-equal, co-heirs in Christ in God eyes however the Quran says that “Men are superior to women because Allah has made so. Therefore good women are obedient, and (as to) those (women) on whose part you fear desertion, admonish them, and leave them alone in the sleeping-places and beat them; then if they obey you, do not seek a way against them; surely Allah is High, Great” (Surah  4, 34).  The value of women is seen as radically different in Islam and their rights as a human being are severely restricted.  A woman’s testimony was valued at only have of that of men (Surah 2, 282) but in the Bible, women were the first eye witnesses to the resurrected Christ.

The Islamic faith believes that Allah is god is the one, true god, but Jesus is not the Son of God as Christians believe (Surah 9, 30). Islam teaches that Jesus was only a great prophet but not divine (Surah, 5:17, 75).  Even Jesus’ death on the cross was faked (Surah 4, 157) and apparently God allowed Judas to look like Jesus and he was crucified instead (Surah 4, 156-158).  There are many other areas we could look at to compare the biblical Jesus with that of the Islamic faith and in contrasting the differences between Jesus and Mohammed but suffice to say that Jesus is not regarded in nearly the same way in the Islamic faith as He is in the Christian faith.

There are a lot of differences between Christianity and Islam.  For one thing, Christians believe in one God but in three distinct Persons.  The Islamic faith believes in only one god as one person (Allah).  Christians embrace the cross as the only way that they can be saved and it is through the work and Person of Jesus Christ (Acts 4:12) so if you’ve got the wrong Jesus, you’ve got the wrong way.  Better get it right this side of death.  Jesus is more than a prophet, He is more than a Teacher; He is the literal Son of God and is fully divine and as such, has all omnipotent power.   In the vital areas, the differences are like night and day.