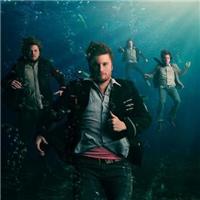 Formed in 2004 around the talents of siblings Aaron (vocals and keyboards) and Ryan (guitar) Morgan, Cincinnati-based modern rock outfit Seabird crafts soul-searching, piano-driven, alternative pop in the vein of Coldplay, David Crowder Band, Needtobreathe, and Switchfoot. The band’s 2008 debut, ‘Til We See The Shore, scored a hit with the single "Rescue." It was followed in 2009 by Rocks into Rivers.

working on some final tweaks to the first 6 songs of the new record...AND we're starting our tour with Barcelona and Meese tonight at the Exit In in Nashville!! hope to see you tonight. we'll probably try out a couple new songs!