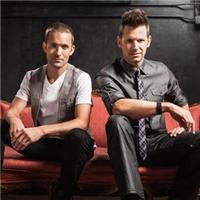 Blending the optimistic alt-CCM sound of bands like Switchfoot and Myriad with a hint of contemporary country twang, 33Miles set out in the early 2000s, in the words of lead singer Jason Barton, to "love on God's people." Barton, guitarist Chris Lockwood, and pianist Collin Stoddard started the band in Nashville, TN, and were quickly snapped up by INO Records, which released the band's self-titled debut in 2007. Their next album, 2008's One Life, proved to be the record that broke them big, landing at number four on Billboard's Top Christian Albums chart and sneaking into the lower reaches of the Top 200. After a seasonal 2009 release, Collin Stoddard left the band to be a worship pastor, leaving Barton and Lockwood to carry on as a duo for 2010's Today.

Jesus Calling (Live)
33 Miles Passion and Purpose Video
There Is A God
33 Miles - One Life to Love (Story Behind the S...
33Miles Behind the Scenes

33 Miles - One Life to Love (Story Behind the S...
33Miles Behind the Scenes
There Is A God
Jesus Calling (Live)
33 Miles Passion and Purpose Video

Jesus Calling(Live) from our newest record "One Life"