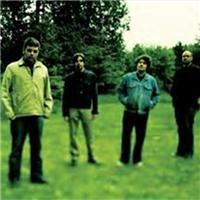 Jason Martin is the sole songwriter behind Starflyer 59, a project that combines his love for British shoegaze, Beatlesque pop, dreamy space rock, and the songcraft of assorted indie bands. A native of Southern California, Martin was raised in a Christian household without the influence of secular music. He later discovered the Smiths' The Queen Is Dead at the age of 12, and although Christianity continued to play an integral role in his life, Martin's faith didn't prohibit him from delving into the music of My Bloody Valentine and other shoegaze icons. Both the Smiths' melodic sense and MBV's walls of reverb-laden guitar would later find their way into Martin's own songwriting.Testing his musical legs, Martin began writing material and playing keyboards for his older brother's band, Dancehouse Children. Starflyer 59 was subsequently launched in 1993, allowing Martin to create his own warped pop music with the help of several guests. Since Martin wrote every song, produced his own records, and played most instruments himself, there was no need for a conventional lineup in the recording studio. Martin did recruit live players for Starflyer 59's many tours, however, which were launched in support of such albums as Everybody Makes Mistakes, Talking Voice vs. Singing Voice, and Dial M. Starflyer 59's endurance allowed the band to maintain a solid audience for the better part of two decades, and Ghosts of the Past was released in 2009 to honor those longtime fans, compiling an assortment of covers, B-sides, and acoustic performances into a double-disc set. In 2010 the band released their 12th album, The Changing of the Guard.