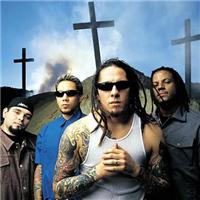 While they play around with the infectious grooves of reggae and Latin music as well as the heavy deliverance of hip-hop and rock, San Diego's hard rock four-piece P.O.D. has defined a universal message. They're born-again Christians and their faith takes a central place in their music.Formed in 1992 in the SoCal neighborhood of San Ysidro, Marcos (guitar) and Wuv (drums) relished the music they grew up on. San Ysidro or "Southtown" was a multicultural area, but working class. While Marcos and Wuv were fond of their jazz and reggae roots, they were young punks in the making. Both loved the gnarl of grunge and took to liking Green Day, Pennywise, Bad Brains, and the Vandals. They got a band together, P.O.D. (short for "Payable on Death"), with Wuv's hip-hop MC cousin, Sonny, and aimed for something real. Cleveland native Traa joined in 1993 and P.O.D. were on the map. Throughout the 1990s, P.O.D. played countless shows across the nation and sold more than 40,000 copies of their three homemade EPs — Brown, Snuff the Punk, and P.O.D. Live — on their own Rescue Records. Atlantic Records was intrigued by the group's hard-working ethic and passion for music, inking a deal with P.O.D. in 1998. The Warriors EP preceded the major-label debut of P.O.D.'s 1999 release, The Fundamental Elements of Southtown. "Southtown" and "Rock the Party (Off the Hook)" were powerful singles, pushing the album to go platinum. P.O.D. earned top honors for Best Hard Rock or Metal Group, Album of the Year, and Song of the Year for "Rock the Party (Off the Hook)" at the 1999 San Diego Music Awards as well.A year later and with the buzz still going, P.O.D. hit the road with Ozzfest 2000 and shared dates with Crazy Town and Staind for the MTV Campus Invasion tour. They also ventured into films, contributing several songs to various soundtracks. "School of Hard Knocks" proved successful in the Adam Sandler comedy Little Nicky in 2001, whereas additional tracks featured in the Al Pacino sports thriller Any Given Sunday and Ready to Rumble maintained P.O.D.'s growing status. A second album for Atlantic, Satellite, was recorded with Howard Benson in spring 2001. Benson captured the magic once again, for P.O.D.'s stature exploded later that year, hot on the heels of the spiritual chaos of debut single "Alive." "Youth of the Nation" scored again for P.O.D., as its positive mix of hip-hop, reggae, and hardcore punk defined a different kind of rock next to the likes of Kid Rock, Limp Bizkit, and Korn. Controversy hit the P.O.D. camp in 2003 when founding guitarist Marcos left the band. However, P.O.D. were soon back on track, tapping ex-Living Sacrifice guitarist Jason Truby as a replacement and recording the Satellite follow-up Payable on Death. Heavy touring followed, and stretched all the way into late 2004. Early the next year, P.O.D. reconvened in the studio, this time with Glen Ballard behind the board, and the Top Ten hit Testify appeared in early 2006.2006 proved to be another transitional year for P.O.D. as the band announced they were leaving longtime record label Atlantic. Soon after, they released the Rhino compilation Greatest Hits: The Atlantic Years. Also that year, guitarist Jason Truby left the band — purportedly on the same day that original guitarist Marcos Curiel asked to rejoin. The band's seventh studio album, When Angels and Serpents Dance followed in 2008.

Shine With Me Acoustic Live from Dallas 102.1 The Edge

Shine With Me Acoustic Live from Dallas 102.1 The Edge - Popular Christian Videos

Acoustic performance of their single Sine With Me