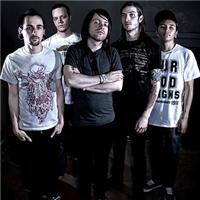 Christian metalcore act MyChildren MyBride came together while the bandmembers were still high-school students in northern Alabama during the early 2000s. Between studies, the guys managed to put out the 2004 album Having the Heart for War, in addition to organizing a brief tour during spring break 2005. A few other self-released EPs appeared through the years and they toured whenever possible; this eventually included a European stint and over 250 dates played in 2007 before MyChildren MyBride inked themselves a deal with heavy-hitting indie label Solid State Records. The group's members had come and gone over time (MyChildren MyBride spent two years as a quartet), and by the time the band had hooked up with Solid State in October 2007, the crew consisted of vocalist Matthew Hasting, drummer Brian Hood, guitarists Kyle Ray and Robert Bloomfield, and bassist Joe Lengson. Their brutal Solid State full-length debut, Unbreakable, appeared in late February 2008, after which the guys spent time supporting Unearth and Bury Your Dead on the road. The band's sophomore outing, Lost Boy, arrived in 2010.