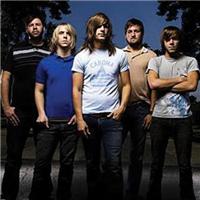 Ivoryline was founded in 2005 by vocalist Jeremy Gray, guitarist Scott Socia, guitarist Dusty Kittle, bassist Robert Woodward, and drummer Wes Hart. The five musicians — all natives of Tyler, TX — had previously played together in the band Dead End Driveway, even releasing a pair of recordings under that name before adopting their new moniker after graduation. As Ivoryline, they wasted little time building a strong following in the South with their energetic take on the Christian rock blueprint. Inclusion in the 2006 Vans Warped Tour helped bring Ivoryline to the attention of Tooth & Nail Records, a Seattle-based label with a roster full of alternative Christian groups. Ivoryline signed with the label and issued a debut album, There Came a Lion, in February 2008. There Came a Lion reached number 25 on the Christian charts and was supported by a series of shows, including Ivoryline's first nationwide headlining tour. Socia left the lineup shortly thereafter, thus reducing Ivoryline to a four-piece. Instead of recruiting new members, though, the slimmed-down band entered the studio with producer Aaron Sprinkle and emerged with Vessels, a harder and more diverse album, which hit stores in July 2010.