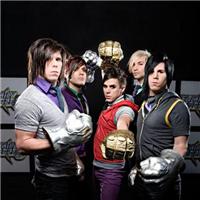 Family Force 5, who once went by the name the Phamily, came together outside Atlanta, Georgia in 2004. The Olds brothers (Soloman or "Soul Glow Activatur" and twins Jacob and Joshua, "Crouton" and "Fatty," respectively) plus friends Nathan Currin ("Nadaddy") and Derek Mount ("Chap Stique") make up the band (original guitarist Brad Allen, or "20 Cent," left to play with other Georgia-based groups Everyday Sunday and the Trust), whose "crunk-rock" sound gained them attention from Maverick Records. Their first album, Business Up Front/Party in the Back, was released in 2006.Family Force 5 kept busy throughout 2007 with odds and ends, then came back in 2008 with the Dance or Die album (which happened to be preceded by an EP of the same name). This album gave Family Force 5 some mainstream success, debuting at number 30 on the Billboard charts, but the group continued to have Christian success as well, winning several Rock on Request Awards that year. A remix of Dance or Die and the holiday release Family Force 5's Christmas Pageant arrived in 2009, and the group then set to work on its third album, the appropriately titled III, which appeared in the fall of 2011.