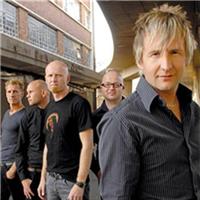 One of the most popular Christian rock groups in Britain, Delirious? was formed in early 1996 as the worship band at a monthly outreach sponsored by Arun Community Church of Littlehampton, West Sussex. After the issue of two independent worship releases, the group began gigging around the area as well and formed their own Furious? label. Furious? released an EP, a live album, and then the band's 1997 studio debut King of Fools.Delirious? received a pleasant shock later that year when the single "Deeper" hit the British Top 20, completely unheard of for an openly religious group. The band signed a contract with EMI, and in 1998 released The Cutting Edge, a double-disc compilation of their early worship recordings. Sparrow/Chordant signed the band for American distribution, and released King of Fools again in May 1998. Mezzamorphis, their Virgin label debut, followed in mid-1999. Glo, released on Sparrow Records was issued in fall 2000. Another two CD set of worship songs, Deeper: The D:Finitive Worship Experience, arrived in 2001, followed the next year by yet another double disc, Touch.

Delirious? is about to release its Farewell Show - Live in London on a 2CD/DVD/Blue-ray collection.