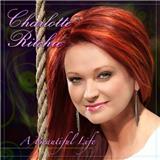 “There is not a mountain. There is not a valley, nothing keeps you from His love. Darkness cannot hide you. He still walks beside you. Nothing keeps you from His love.”Those lyrics have become words Charlotte Ritchie has lived. Not only are they included on her latest solo recording, they have become a way of life and a faithful promise for the talented soprano, who confesses that she is living her life’s dream. There has never been doubt in her mind as to what her calling in life was. “I always knew I was called to sing,” Charlotte shares. “That was the desire of my heart, and I knew God would fulfill that desire.”It’s been quite some time since Ritchie’s dream first became a reality when she joined popular Southern Gospel group, The Nelons at the age of 17. Joining The Nelons and embarking on a full-time musical career was thrilling, to say the least, for Ritchie, who attended her first Christian concert at the age of 14. “I grew up listening to one of Christian music’s all time great singers, Sandi Patti. I think I heard her for the first time when I was seven or eight years old on the radio, and I just fell in love with her singing.” Growing up in Maryland, according to Ritchie, she didn’t have the opportunity to attend many Christian music concerts; however, she attended as many as possible, and was thrilled when she received the call from Rex Nelon to join his group. Having sung with a friend’s family on a part-time basis for several years in area churches, Ritchie soon began capturing the attention of audiences nationwide. She also captured the eye of a fellow musician, who played drums for another successful group, Jeff & Sheri Easter. After meeting at a video taping for legendary singer/songwriter Bill Gaither, Charlotte and Greg Ritchie began dating and married in December of 1995. The two traveled separately with their individual groups for several months before she eventually joined the musical team of Jeff & Sheri Easter, providing the smooth, rich, high harmony for the group. The Ritchies traveled with Jeff & Sheri Easter for 12 years before leaving the group in March to embark upon new endeavors. These endeavors include solo concert events for Charlotte and devoting more time to family, which now includes seven-year-old son, Landon, and two-year-old daughter Jayna.Although solo engagements are somewhat new to the talented vocalist, Ritchie has already enjoyed an illustrious career, which now spans more than a decade. Throughout her years with Jeff & Sheri Easter, she has shared the musical stage with such notable names as the Gaither Vocal Band, David Phelps, Russ Taff and Janet Paschal, just to name a few. She has been regularly featured on the highly successful Bill Gaither Video and Concert Series and has performed before thousands in arenas nationwide, as well as in Europe, Australia, Canada and South Africa. While Ritchie has remained content to be out of the spotlight, at the encouragement of many industry peers, including renown singer/songwriter Gloria Gaither, Ritchie recorded and released her debut solo project in 2006. The recording, from RSI Music Group, titled, Closer, spawned much success, including three Top 40 hits on Southern Gospel radio, as well as two Top 20 hits and a Top 10 hit in the Inspirational market. Ritchie’s brand new release, Bridges Over Blue, promises to hold equal, if not greater, success. Produced by fellow label mate Gordon Mote and Gaither Vocal Band member, Marshall Hall, the recording features a variety of styles. From the upbeat In Everything Give Thanks and I’ve Got Joy, to stirring ballads like My Father’s Angel, to the thought-provoking Sometimes I Picture God That Way and the title cut, Bridges Over Blue, the recording showcases Ritchie’s exceptional talent, as her smooth, rich vocal ability shines brightly throughout the recording.With her debut solo recording, Ritchie began to define who she is as a singer and, more importantly, who she is as an individual. This latest recording effort delves deeper into that definition, providing a more exact explanation of Ritchie’s heart and passion. “I’m so excited about this recording and the path in which God is leading me and my family. One of my favorite songs on the recording is Nothing Keeps You From His Love because it truly conveys my heart and where my journey is at this point in my life. The lyric says, ‘Future lies behind every door, joy or despair, sunshine or rain. There’s no need to fear. His hand can reach you. He’s ever near.’ Sometimes it’s difficult to leave our comfort zones and move into the unknown, but that’s exactly what God wants us to do. His plans for us are greater than we can imagine, but He wants us totally reliant upon Him. When we are, we see His promises fulfilled and His hand at work. Regardless of the path we take in life, nothing can separate us from the love of Christ. This promise has proven true time and time again.”