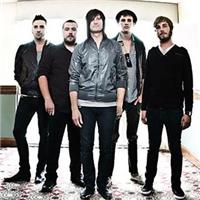 Hailing from Orlando, FL, Anberlin formed from the ashes of various other area projects, including the Christian punk outfit SaGoh (Servants After God's Own Heart). Led by the soaring vocals of Stephen Christian, the positive-thinking Anberlin also included Joseph Milligan (guitar), Nathan Young (drums), Joey Bruce (guitar), and Deon Rexroat (bass), and presented an alternative pop/rock sound that, while inflected with the earnestness of emo, was closer to the mature stylings of Third Eye Blind. A five-song demo landed Anberlin the attention of the Seattle-based indie label Tooth & Nail, which signed the group in 2002. Blueprints for the Black Market marked the band's debut in May 2003, and Anberlin supported the album with shows alongside groups like Fall Out Boy and Story of the Year. Second guitarist Nathan Strayer later joined the lineup, and Anberlin returned in February 2005 with Never Take Friendship Personal. Their third record, Cities, appeared two years later and debuted at number 19 on the Billboard charts; soon after its release, however, Strayer made his exit and was replaced by former Acceptance guitarist Christian McAlhaney. 2008's New Surrender saw the retooled band joining the roster of Universal Republic Records and enlisting the help of Neal Avron, who had formerly produced records for Fall Out Boy, Yellowcard, and New Found Glory. In early early 2010 Anberlin went into the studio with Grammy-winning producer Brendan O'Brien, and later that year released their fifth studio album, Dark is the Way, Light is a Place.