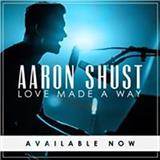 
A contemporary Christian singer and songwriter, Aaron Shust grew up in Pennsylvania, but became a true musician in Georgia, where he studied music theory.
His first album, Anything Worth Saying, was recorded in 2004, which landed him a deal with the Brash Music label soon thereafter.
The album would end up becoming the fifth best-selling praise & worship record in 2006, and produced a genre radio hit with the single "My Savior My God."
The song would go on to hit the top spot on a number of charts, eventually scoring Shust a Dove Award for Best Song.
His second album, Whispered and Shouted, was released in the summer of 2007 to impressive first-week sales. ~ Chris True

He died for our sins and we are now forgiven. Sing praises to His name with 'Resurrecting' from Aaron Shust. Aaron truly has a heart for the Lord and it's so amazing to hear him using his God-given talent for worship. His name is glorious and we continue to give thanks for all the blessings he has bestowed upon us. This song is exactly what my heart needed to hear today.