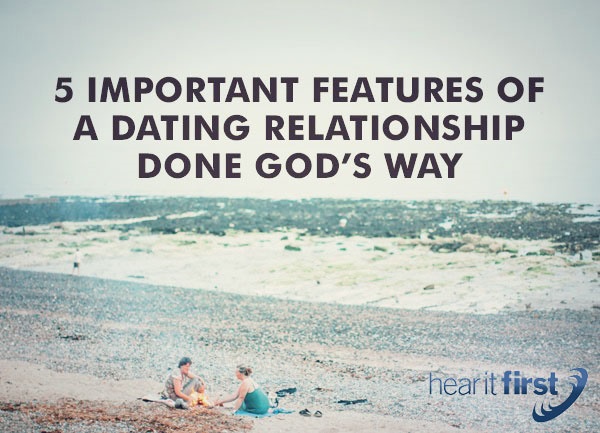 Here are 5 important features that every dating relationship should have if done God’s way.

This might seem like a no-brainer but there are no exceptions to having sex before and outside of marriage because God has clearly said in His Word that sex is only reserved for those who are legally married.  The author of Hebrews writes “Let marriage be held in honor among all, and let the marriage bed be undefiled, for God will judge the sexually immoral and adulterous” (Heb 13:4) so I would ask you, how many of the sexually immoral will God judge?  He will judge all of them unless they repent of this sin.  Even if a couple is engaged to be married this doesn’t give them permission to engage in premarital sex.  This includes what is called “petting” or “touching” areas that should not be touched except by a married couple.  Jesus said that lust of the heart is the same as adultery (Matt 5:28).  The lie I have heard so frequently from some women is that their boyfriend or dating partner said, “If you really loved me, you would do it” but the truth is, if he really loved her, he wouldn’t do such a thing.  Love does not take advantage of another or cause one to stumble into sin (1st Cor 13).  If this man is willing to have sex with the woman he’s engaged to and doing so before being married, what makes us think he won’t be unfaithful after he’s married?

Many couples who dated became best friends first.  A lot of marriages began as dating someone and over time, becoming their best friend.  Then, the couple may not be able to get enough of one another’s company.  The couple becomes such good friends that they may end up marrying.  That’s a much more solid foundation upon which to begin a marriage, if it leads to that, but you don’t have to be dating as a means to get married. I can lead to that but it doesn’t always have too.  Take your time, don’t move too fast, good things come to those who wait and wait patiently on the Lord.

I like the idea of having a couple who has just started dating to date in places where there are other people.   If you date someone in public places like at a restaurant or to a sporting event, they’ll get to see how this person reacts around other people, maybe even children.   This also reduces the likelihood of being tempted to have premarital sex.  If you are dating in public, you’re likely going to be more discreet about your behavior because you’ll be more inhibited from doing something inappropriate.  This also takes the pressure off if the couple is not meant for one another.  They can simply learn from this and maybe date someone else and still be friends.  Double-dates are also helpful when you are first starting to date someone because then there’s at least someone there who can keep the conversation going and help eliminate those awkward silences.

There is no hard and fast rule that you should only date to prepare for an engagement and possible marriage.  Dating should be fun.   Having a date can be more fun too when it is shared with another couple, either dating or married.  The goal in dating should certainly include having fun.  Doing fun things together helps the two get to know one another.  If you go bowling, to a movie, or just take a walk together, try to make in a pleasant experience.  Drop all of the expectations and don’t feel like you’re performing or “trying out” to see if you are meeting all of the other person’s expectations of you.  That’s too much pressure. Have fun, find things you both like to do and have in common, and just do it.

Next to not having premarital sex, the second most important thing is be doing things that are not sinful. If you take your date to a violence-filled movie or it has sexually explicit language or nudity, you have no business do so.  Certainly, a profanity-laced movie where God’s name is blasphemed is not acceptable at all.  When we participate in activities that God declares sinful, God will not bless this.   There is no excuse for doing something or seeing something that glorified sin or condones it at least.   As a couple, you should do nothing on a date that you would not do in front of the church.

Obviously, Christians should not be dating those who are not saved.  Paul wrote “Do not be unequally yoked with unbelievers. For what partnership has righteousness with lawlessness? Or what fellowship has light with darkness” (2nd Cor 6:14)? When you are dating a Christian and telling your date that you are a Christian, but not walking in the light, you are deceived as John wrote “If we claim to have fellowship with him and yet walk in the darkness, we lie and do not live out the truth” (1st John 1:6).  You can easily cause another believer to fall into sin, or possibly push them into sin in some cases.  That’s a very bad plan.  God will not be pleased and will not bless such a person who takes advantage of their brother or sister in Christ.

I love listening to songs about hope on Christian radio!  They always encourage me and keep me motivated to focus on the important things in life, like God and family.  Here are 17 songs that will uplift your spirit with hope!  These are in no particular order.