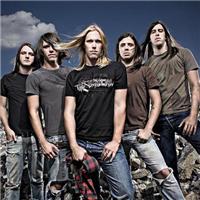 When five men from the backwoods of Tennessee decide they have nothing to lose, you never know what might result. It could be mayhem. It could be recklessness. It could be just plain killer. Or, it could be all three at the exact same time. On, Temptation Come My Way, The Showdown gives you the where, why, and how of the devastation, unpredictability, and substance that has come to personify this one-of-a kind heavy metal act. Just don't ask them if they fit into the fashion of what heavy music today has become: Front-man David Bunton proclaims: 'We're Just trying to bring back masculine. We're trying to take the sensitive guy out, and bring the BAD BOY back. Just watch MTV or Fuse and they are littered with music videos of dudes who look like they are scared to be in their own band. It's all about star power, and no one has it anymore. If it gets any worse I'm going to just put Enter Sandman' on repeat, then I wont have to listen to all those sensitive feminine bands crying and whining. We are going to stuff those jokers in trash cans and give them swirlies.'