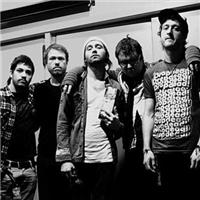 
Atlanta-based post-hardcore/alternative metal act the Chariot is a showcase for singer Josh Scogin. Formerly frontman for the popular Christian nu-metallers Norma Jean (originally known as Luti-Kriss, before Dirty South rapper Ludacris eclipsed their limited popularity), Scogin left Norma Jean for undisclosed personal reasons in 2003, following the release of their second album. Largely dispensing with the rap-rock and nu-metal aspects of Norma Jean in favor of a punkier metalcore direction, Scogin almost immediately formed the Chariot with members of other area metal and CCM groups.
The original lineup of the Chariot consisted of Scogin, singer and guitarist Keller Harbin, guitarist Tony Medina, bassist Joshua Beiser, and drummer Jeff Carter. Signing to the popular Christian indie rock label Solid State Records in 2004, the band debuted later that year with the almost operatically titled Everything Is Alive, Everything Is Breathing, Nothing Is Dead and Nothing Is Bleeding. Following the subsequent release of a live DVD, Ladies and Gentlemen, the Chariot, Medina and Carter left the band; new drummer Mark Nicks debuted on the 2005 EP Unsung, but was replaced by Jake Ryan before sessions began for the band's second full-length, The Fiancee. After the album was recorded, Beiser and Harbin left the Chariot (Harbin joining Every Time I Die) and were replaced by Jon Terry and Dan Eaton in time for an extensive North American package tour with other bands from the Solid State Records roster.
Delayed by the rapid changeover in band personnel, The Fiancee eventually surfaced in early April 2007 with new bassist Jon "KC Wolf" Kindler on board. Terry and Eaton's time in the band would be short-lived, with the pair being replaced by Bryan Russell Taylor and Stephen Harrison before the release of the band's 2010 album, Long Live. Taylor would be the next casualty of the Chariot's revolving-door lineup, with replacement Brandon Henderson coming on board in 2011. Further lineup changes found Kindler leaving the band to attend college with Henderson and Harrison taking over bass duties in the studio. The Chariot's fifth album, One Wing, featuring production from the band's longtime engineer/producer Matt Gordon, arrived in 2012.

The Chariot "They Drew Their Swords" ...

The Chariot "They Drew Their Swords" ...