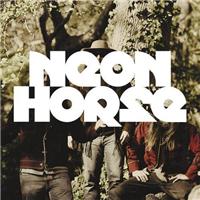 
It's difficult to write a biography of Neon Horse, because the band has taken a vow of silence in terms of its members and their backgrounds. Not so much like Gorillaz or the Residents, where everyone who cares knows the men behind the curtains, or Jandek, who maintains his forbidding anonymity simply by refusing to speak publicly, but more like the minor new wave band Blanket of Secrecy, who gained more publicity for their sole album by fostering an air of mystery than they would have had it been known from the beginning that they were a band led by Peter Marsh of the little-remembered '70s soft rockers Easy Street. Neon Horse's amusing official bio on their MySpace page makes reference to a lead singer named "Norman Horse," and blithely claims that the other members' histories in various unknown Los Angeles bands prior to Neon Horse's formation in December 2005 is simply too dull and predictable to discuss in detail. However, the band's signing with the alternative CCM label Tooth and Nail Records suggests a connection with the Christian rock culture, and the online rumor mill seems to have settled on Mark Solomon of Stavesacre and the Crucified as the pseudonymous Norman Horse, with many claiming specifically that he's the one performing under layers of face paint and costume in the video for the band's first single, "Cuckoo." Similarly, the band's quirky mix of Eagles of Death Metal-style hard rock playfulness and early-'80s new wave revivalism has been credited to producer and multi-instrumentalist Jason Martin of Starflyer 59.