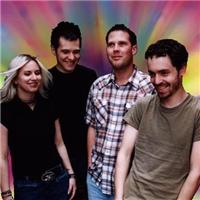 
With the styling's of 80's new wave and indie-pop maintaining a strong bond amongst the members of Morella's Forest, they wanted to introduce this sound to their home of Dayton, Ohio. Consisting of Sydney Rentz (vocals/ guitar), Sean McCorkle (bass), Shawn Johnson (guitar/ keyboards) and Nate McCorkle (drums), the band had the chance to play all around the Mid-West with their brand of aforementioned influences, noisy guitar sequences and melodic keyboards before signing with Tooth and Nail Records in 1996. After the release of the EPs "Super Deluxe" and "Hang Out" that same year, their first full-length "Ultraphonic Hiss" came out the following year. With the eventual recruitment of former Brainiac keyboardist John Schmersal, the release of Morella's Forest second album "From Dayton With Love" soon came about in 1998.