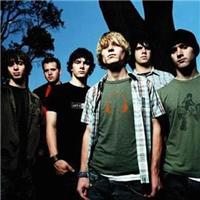 
Christian metal act Falling Up is in many ways a protégé of the better-known group Kutless: members of the two bands grew up together in the Portland suburb of Albany, OR, and the more established band initially brought Falling Up to the attention of both their label, BEC Recordings, and their initial producer, established CCM artist Aaron Sprinkle. But where Kutless is a fairly standard-issue Christian gloss on metal-tinged emo, Falling Up has a more chart-oriented sound with strong electronica and hip-hop influences (including a full-time programmer and DJ in their early lineup) married to their nu-metal base. The band formed in Albany in 2000, eventually coalescing into the lineup of singer, keyboardist, and primary songwriter Jessy Ribordy, guitarists Tom Cox and Joseph Kisselburgh, bassist Jeremy Miller, drummer Josh Shroy, and DJ and programmer A-Dub. Naming themselves after an early unrecorded song, Falling Up signed with the Tooth & Nail subsidiary BEC Recordings in 2003 and released their debut album, Crashings, in February 2004. Slimming down to a four-piece with Cox's and A-Dub's departures, Falling Up released their more conventionally metallic second album, Dawn Escapes, in the fall of 2005. Falling Up underwent another major lineup change in 2006, replacing founding member Kisselburgh with new guitarist Micah Sannan and adding full-time keyboardist Adam Taylor so Ribordy could focus exclusively on vocals. With the recording of their third album delayed by the lineup turmoil, Falling Up took the somewhat unusual step of releasing an album of electronic, industrial, and darkwave reworkings by various producers and DJs of songs from their first two albums. The remix album, Exit Lights, was released in September 2006.