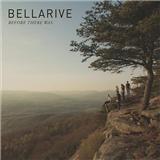 
Based out of Orlando, Florida, Bellarive specializes in a heady blend of richly detailed, shape-shifting indie pop and anthemic Christian rock that has drawn comparisons to artists like the Rend Collective Experiment, MuteMath, and the David Crowder Band. Formed in 2009 around the talents of Sean Curran, Melissa Mage, Mike Mage, Josh Luker, and Kenny Werner, the quintet issued a debut EP in 2009 before inking a deal with Sparrow Records, who would go on to put out the band's 2012 debut long-player The Heartbeat and 2014's Before There Was.